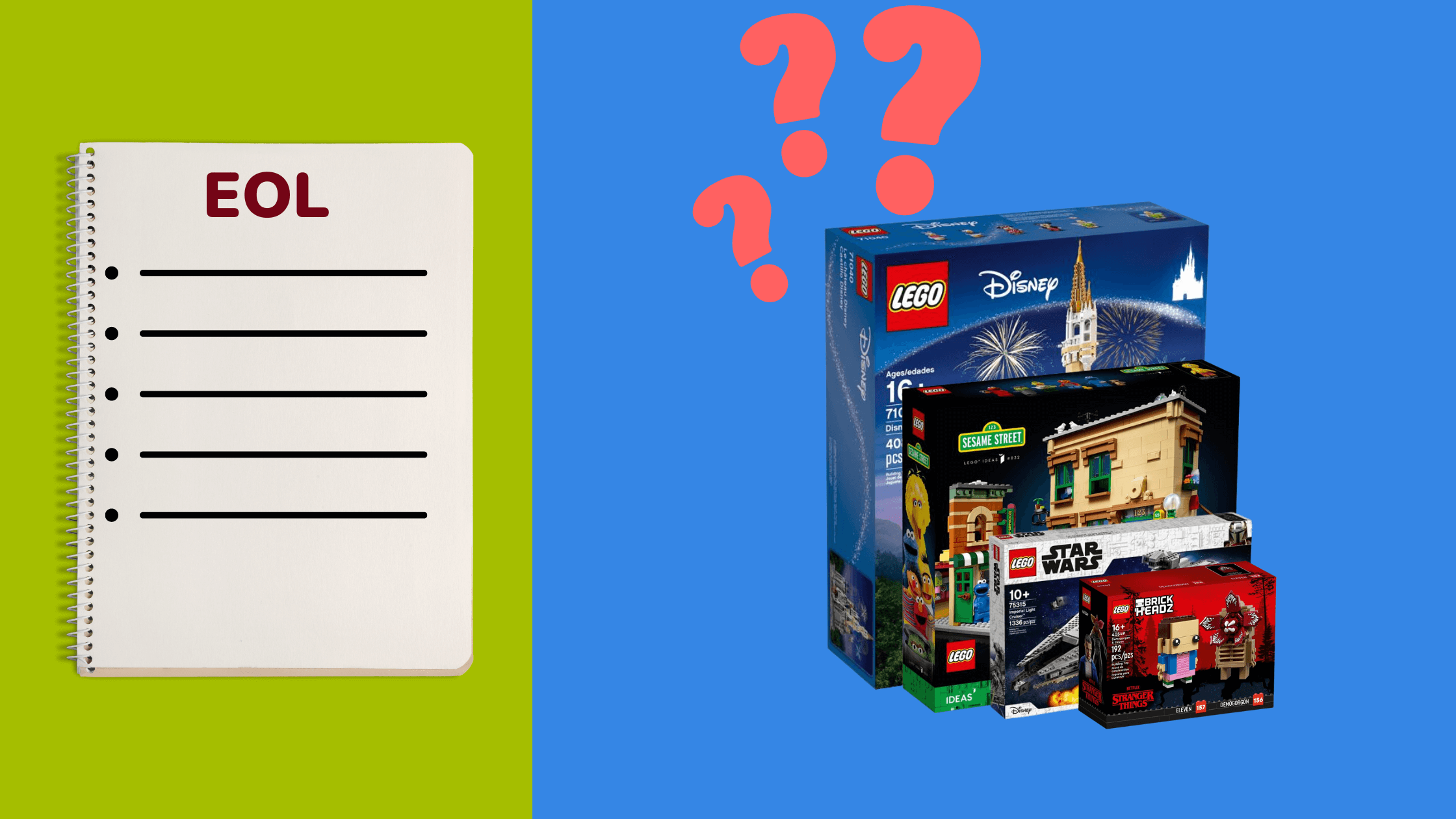 Buy popular Lego® sets cheap before they are no longer available. This is what the Lego EOL list allows you to do. As usual, many Lego sets will disappear from shop shelves in 2022. If you are interested in buying sets from our Lego EOL list, you should be quick. Typically, availability of EOL sets tightens towards the end of the year and prices also increase. It should be noted that Lego may make changes or renew sets at short notice. In such cases, this will be taken into account and added to our EOL list.
Read more
Filters
Price
€
-
€
1€
2225€
Discount
%
-
%
0%
100%
Release year
-
1953
2022
Number of pieces
-
0
11695
EOL state
〉
Unknown
Begin of Life
Middle of Life
Nearly end of life
Already EOL
Popular Themes
〉
Architecture
BrickHeadz
City
Creator Expert
Disney™
Harry Potter™
NINJAGO®
Speed Champions
Star Wars™
Technic
Other Themes
︿
Filters
- 60% 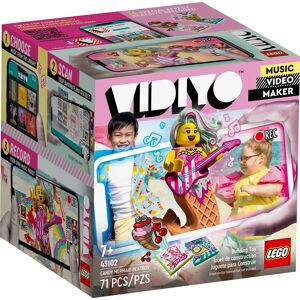 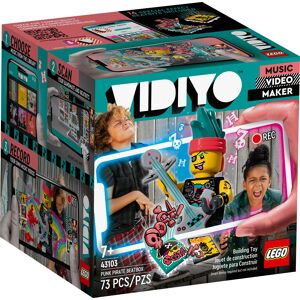 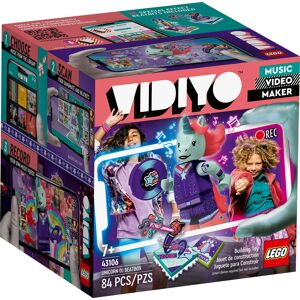 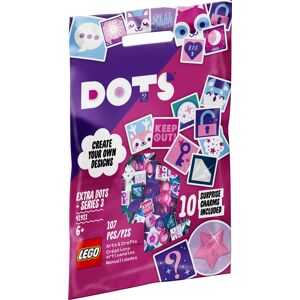 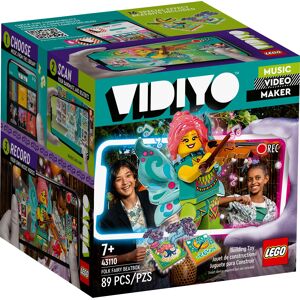 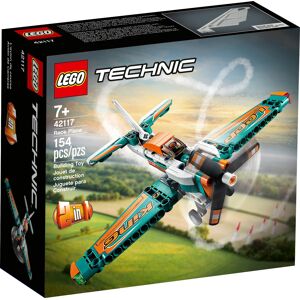 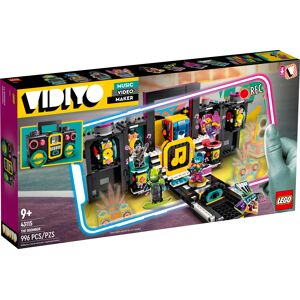 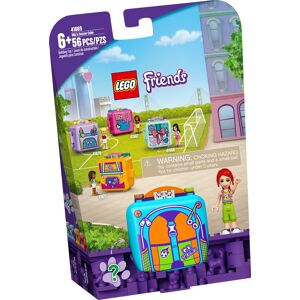 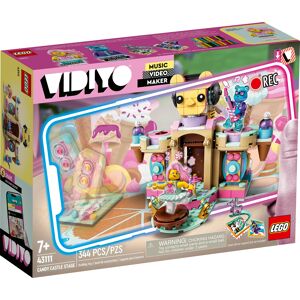 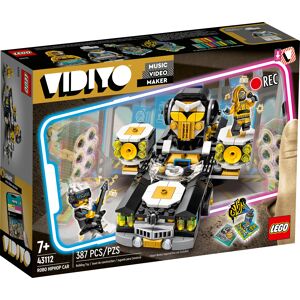 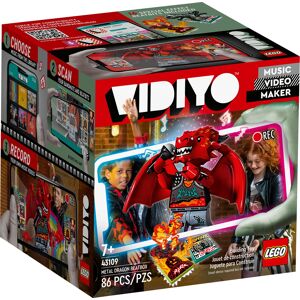 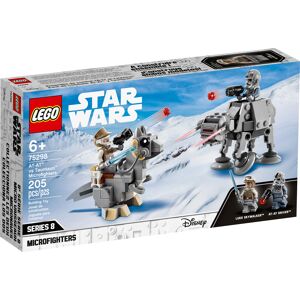 What is the life cycle of a Lego® set?

Usually, Lego® sets are only produced and offered for official sale for a certain period of time. The life cycle of a Lego set depends on popularity and theme and is usually 1 to 3 years after release. After this period of time, the kits of the Danish brick company disappear from the shelves and go EOL.

Buy Lego® Sets at a great price: The best time

In order to determine the best time to buy Lego® sets, it is important to know the life cycle. This can be divided into the following 3 phases:

The highest discounts can be expected in the middle phase of life. In the last phase, prices often increase and popular sets can only be bought at the RRP. The sets on our EOL list are in the "Nearly end of Life" phase and will consequently go EOL in the course of 2022.

You want to know what EOL means exactly and which Lego® sets will disappear from the shops this year? In the following, we answer the most important questions about the Lego EOL.

What does Lego® EOL mean?

The abbreviation EOL "End of Life" refers to the end of production of a Lego® set. The Danish brick company only produces its building sets for a certain period of time. This is usually 1 to 3 years. After the end of production, the Lego sets concerned are officially no longer available and EOL. On secondary marketplaces such as eBay, the sets are then often offered at higher prices.

When will Lego® sets go EOL?

The EOL date depends on both the popularity and the theme of the Lego® set. The more popular a kit is, the longer it will be on sale. In most cases, however, sets go EOL 1 to 3 years after release. Occasionally, Lego extends the lifetime of sets for a short period of time. This is the case, among other things, when they are particularly popular.

How can I tell that a Lego® set is EOL?

On the website 🇩🇪 🇺🇸 of the Danish brick manufacturer, EOL sets are marked as "Retired Product". In the Brickfact price comparison or in the Brickfact App, you will find the marking "Already EOL" for Lego® sets that are already EOL.

Will Lego® sets be reissued?

In rare cases, Lego® sets are reissued and production is resumed. This is the case, for example, with very popular building sets. However, new editions are not announced in advance. Accordingly, you should not rely on your favourite set being re-released after EOL.

What does Lego® mean with "Retiring soon"?

The note "Retiring soon" is an official EOL announcement on the part of Lego®. Only a few kits are marked in this way. This is the last chance to buy sets before they are no longer available. Again, it should be noted that Lego reserves the right to extend sets anyway and to postpone the EOL date accordingly.

Which Lego® sets will be discontinued in 2022?

Every year, many Lego® sets go EOL, making room for exciting new products. You can see which sets will be discontinued in 2022 in our EOL list. If you are only interested in certain themes, we recommend using the filter options on this page. With the help of these, it is possible to narrow down the theme worlds or set a price range.

You should not wait too long to buy popular sets. Time and again, sought-after kits sell out early and can no longer be bought cheaply even before EOL. From our EOL list you can see which sets are expected to disappear from the shops in 2022.